Before Sophie, our older daughter, was born, it was pretty clear to me that I would not dress my baby girl in pink. Don’t ask me where this idea had come from, because I am not fundamentally anti-pink. Not at all. Maybe I just didn’t like the idea to be pushed into a pattern: Girls wear pink! Boys wear blue! Full stop. Anyway, Sophie was born and we received, guess what, a lot of super cute, mainly pink clothes for her. I must have changed my mind about Sophie wearing pink as soon as I put the first one of those lovely dresses on her. She looked adorable – in pink. And my pink baby clothes-phobia was cured. But as soon as I got over that one, I made another dresscode plan: Our girls should not wear clothes with imprinted cartoon characters. And why’s that, you are wondering? Because I really didn’t like them (at the time). So, the girls grew older and it didn’t take them very long to develop their own fashion style. And, of course, one of the main elements of their fashion style were imprinted cartoon characters. Preferably on all jumpers, shirts, leggings… I managed to talk them out of it for quite a while. But eventually, when i saw  the disappointment in their eyes because that’s the only thing they really fancy, I had to give in. And bought two long-sleeve shirts – one with Anna, the other one with Elsa (from Frozen) on. That was a highlight, I can tell you, at least for the kids. And I was cured from Phobia number two. Why am I telling you this story. Well, the subject of cartoon characters didn’t stay just with clothes. When  we offered our girls to choose a theme for their birthday parties, they were first choice as well. We started off with a Gruffalo-Party, Hello Kitty was next, then Lillifee (fairy character popular in Switzerland and Germany)… and this week for Lilly’s 5th birthday, no surprise there, I took on the Frozen-challenge.

Being me, I leave everything to the last minute. That’s no different for party preparations. I probably need a bit of pressure to function properly and efficiently. I was so glad that the Christmas tree was still standing in our living room. I took off all the Christmas balls and replaced them with some cotton-wool balls, pretending to be snow. Around the tree I hung up some cotton-wool balls with fishing line, representative for romantic snowfall that was very rare here in Switzerland so far this winter. Above the tree, I hung up a garland of flags, saying “Happy Birthday”.

The table, I covered with a light-blue table cloth – the same I used for the Christmas dinner 😉 and sprinkled some faked snow and light-blue  wooden snow-stars on it. With some Frozen cups, plates and napkins plus all the food kept in white and blue that looked pretty. I was stressing about the cake for quite a while. But by coincidence, I found a baking pan shaped as a snowman in the cupboard that I had completely forgotten about. I baked a basic chocolate cake, covered the parts that had to stay brown with aluminium foil, then sprinkled some icing sugar all over the snowman, removed the foil, added a marzipan carrot and finished he was, Olaf, the snowman( well not quite,but not one five year old complained).

To decorate the apple cupcakes, I coloured some white marzipan with blue food colouring, cut out some snowflakes with cookie cutters and placed them on the cupcakes.

No party without games. After telling the children the story of Anna & Elsa, I split the group of kids (8 children) into two groups. Group 1 had to close their eyes, group 2 hid Olafs carrot nose (a real carrot) in some predefined rooms of my blueberry house. Group 1 then had to look for the carrot, being guided by group 2 giving them hints. “It’s getting warmer” meant that they got closer to the carrot, “it’s getting colder” obviously meant the opposite. After we sang “happy birthday” and ate some cake, the kids were up for a round of Frozen-bingo. I prepared some sheets with six pictures, that all had something to do with Frozen, on each. Each picture I also printed separately onto a single sheet, folded them up and put them into a big basket. Each child chose a card with six pictures on and marked the specific picture with a cross as soon as I had drawn it. As soon as one of the kids had all six pictures ticked off, they were supposed to shout “Bingo”. And won a little prize.

The last game we played was “do you want to build a snowman?”. Also very simple. And suitable for kids between 4 and 6, I would say. The kids sat in a circle, equipped with a empty paper and a pen. I asked them to draw the head and the belly of the snowman. When they were all ready, we started to throw the dice. One after the other. Throwing a certain number, they were allowed to draw the following: 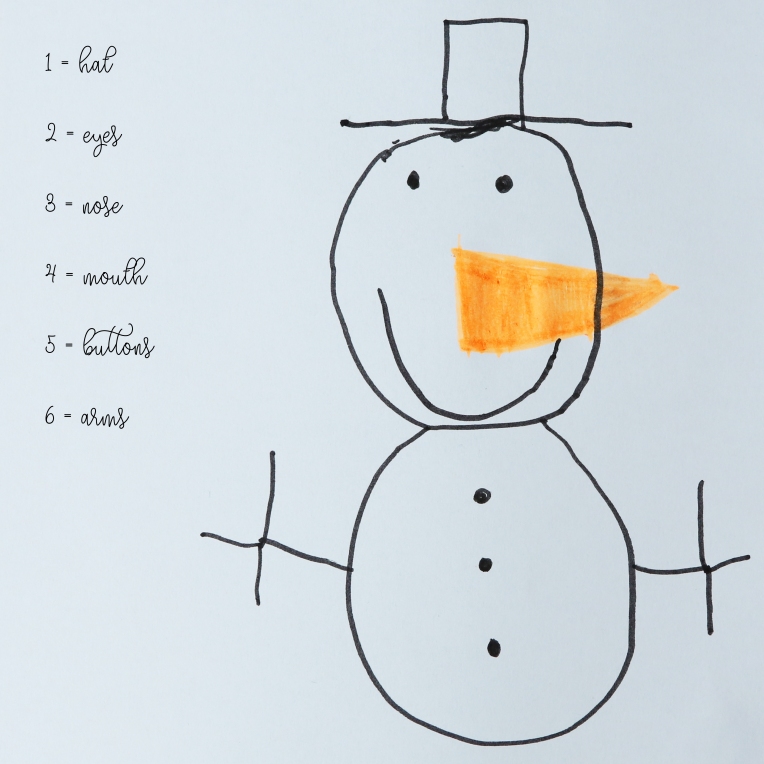 The first child having the snowman complete, received a little prize. But we carried on playing until every child had a finished snowman – and a little something in their pocket.

After that the kids really just wanted to play, dressed in their Anna & Elsa princess dresses…